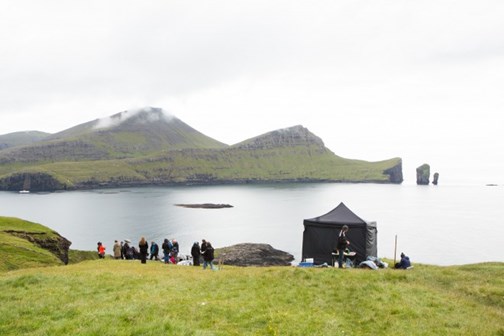 Scenes from the Faroe Islands have been used in a new Hollywood romantic thriller by award-winning German director, Wim Wenders. The film, called Submergence, premiered at films festivals in Toronto and San Sebastian in September.

The film, which is based on the novel of the same name by J.M. Ledgard, stars Oscar-winning actress Alicia Vikander and multiple award-winning actor James McAvoy. McAvoy plays a hydraulic engineer, James More, and Alica plays a bio-mathematician, Danielle Flinders. They fall in love in a remote hotel in Normandy before More is held captive by jihadist fighters in Somalia and Flinders is confined to a submarine on the bottom of the Greenland Sea. From their respective confines, they are drawn back to the Christmas of the previous year in Normandy.

“One of the great benefits of an increase in interest in the Faroe Islands as a film location is that people within the Faroese film industry can gain invaluable experience from international film projects,” says Oyvindur.

“They can build an international network and will have greater opportunities to further themselves within the industry. The idea is that people within the Faroese film industry must play an active role in foreign film productions if those productions require some sort of compensation. Secondly, if the Faroe Islands become more known as a film location, it will most likely help market original Faroese films abroad.”

Jan Berg Jørgensen, chairperson of the Faroese Film House, is one of few Faroese to have already seen the film. He attended the San Sebastian Film Festival with four other people from the Faroese film industry. Jan says the film was good, ambitious and worth watching: “It gave me goose bumps seeing breath-taking footage of Bøur and Tindhólmur. The visuals certainly left their mark.”

The film footage from the Faroe Islands accounts for approximately three to four minutes. Submergence, which also includes scenes from France, Germany, Spain and Africa, will be released on various dates in the coming months, depending on locations.

This article was originally published 25 October 2017 on Faroeislands.fo
Words: Levi Hanssen
Pic: Mureldur – on location in Bø, Faroe Islands, 2016