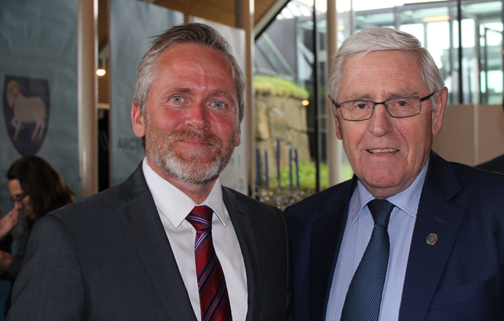 The Faroese and the Danish foreign ministers met yesterday in Tórshavn to discuss how Faroese authorities can gain more access to confidential foreign policy info.

When numerous EU countries, including Denmark, recently expelled Russian diplomats in a co-ordinated response to the poisoning of a former Russian spy, Faroese authorities decided not to act on the matter.

Michelsen said at the time that he had received no information on the matter from the Danish authorities. He pointed out in an interview with Kringvarp Føroya that ”it is too unclear what this matter (the UK spy poisoning-scandal) is all about”.

Michelsen added: ”The Danes (the Danish government) have not replied to the 3-4 letters that I have sent to them. That is unacceptable. So when you have to make a big decision like this, then I must conclude that I do not have the right foundation to do so – other than what the newspapers say and that is not enough (evidence) for a foreign minister to base a decision upon.”

However, all of this is about to change now, Michelsen said yesterday after meeting with his Danish counterpart, Anders Samuelsen.

The Danish foreign minister said he is willing to cooperate with Faroese authorities to find some safe and effective ways of sharing sensitive information, adds Kvf.fo.