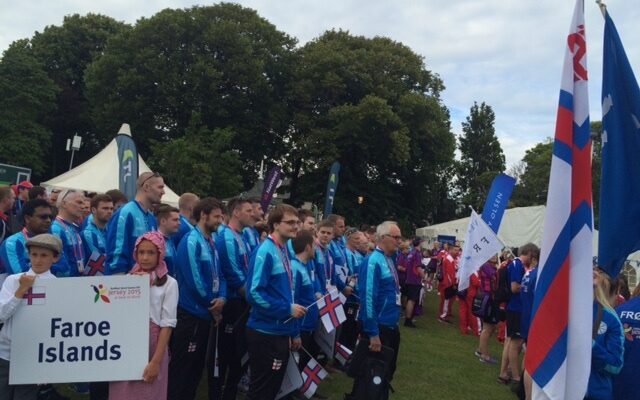 The Faroe Islands’ ambition to host the International Island Games for a second time has taken a step closer after the Faroese parliament voted unanimously in favour of providing a financial guarantee to host the global event.

The guarantee of 1,350,000 Euro, which was proposed by Faroese Finance Minister Kristina Háfoss, has the full backing of the Faroese government and will be in force until the end of 2030. Mrs. Háfoss, herself a former Islands Games swimmer, who participated in the Åland 1991 and Isle of Wight 1993 editions, is a passionate advocate of sport development on the Islands.

The Faroese Confederation of Sports and Olympic Committee (FCSOC) is a founding member of the International Islands Games Association (IIGA), and successfully held the third edition of the Games in 1989, hosting 15 nations and 800 athletes across 11 sports.

The Islands Games are a biannual multisport event, which now boast 14 different sports and participants from 27 island nations around the world, from Rhodes to Bermuda and Greenland to the Falkland Islands. The next Island Games are due to be hosted in Gibraltar in 2019.

The Faroese Confederation of Sports and Olympic Committee are hoping to host the Games as soon as possible, but not later than 2029. Involvement in and the hosting of this international sporting event as a standalone nation adds to the many compelling reasons the FCSOC is putting to the International Olympic Committee in its campaign for Olympic recognition, which was launched in March this year.

“We are thrilled that the government of the Faroe Islands has shown such strong support in favour of bringing the International Islands Games back to the Faroe Islands for the first time since 1989. With financial hosting guarantees in place we are now well positioned to launch a bid for the Games and put the Faroe Islands firmly at the centre of this fantastic sporting celebration once again.

“The Island Games are an important element for the ongoing growth and development of sport on the Faroe Islands, offering Faroese athletes a much-needed opportunity to represent our country on the international stage. Our dream is to one day extend that same opportunity to our athletes at the Olympic Games, as we continue our campaign for Olympic recognition.”

“Having competed at the Island Games on two occasions I know what it means to proudly represent the Faroese flag in international competition. By providing the financial guarantees needed to host a future edition of the Games, the Faroese government is helping to safeguard the future of Faroese athletes.

“The Faroe Islands punches well above its weight in sport both locally and globally – one in three people on the Faroe Islands is a member of a sports club – but without more opportunities to compete internationally, our top athletes will struggle, which is why we are also campaigning for Olympic recognition.”

The Faroe Islands, a self-governing region of the Kingdom of Denmark that competes in the Olympic Games under the Danish flag, intensified its campaign for Olympic recognition earlier this year.

Building on a 40 year ambition, the Faroese Confederation of Sports and Olympic Committee [FCSOC] unveiled a campaign brochure outlining a swathe of sporting, cultural and political arguments to support its participation in the Olympic Games under its own flag.

As well as being a founding member of the International Paralympic Committee (IPC) and competing in every Paralympic Summer Games since 1984, the Faroe Islands is also recognised in its own right by eight International Federations: archery, badminton, football, handball, judo, swimming, table tennis and volleyball.

About the Faroe Islands
The Faroe Islands, which has a population of 50,000, has been a self-governing region of the Kingdom of Denmark since 1948 and competes in the Olympic Games as Denmark. Located north-west of Scotland’s Shetland Islands and almost 1,000km from Denmark, the Faroe Islands has been campaigning for more than 40 years for Olympic recognition. The Faroese Confederation of Sports was established in 1939 and its Olympic Committee in 1982. Sport on the islands is 100% self-funded, including all anti-doping activities [no sport funding comes from Denmark]. 18,000 Faroese are members of sports clubs which is driven and overseen by the FCSOC.