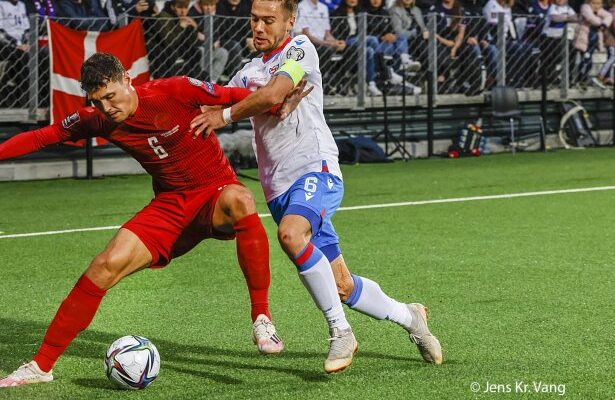 Faroe Islands captain Hallur Hansson was back in the starting eleven and had a solid performance in the unlikely thriller against Denmark, helping to keep the Danes at bay for a full 84 minutes. Image credits: Jens Kristian Vang.

The Faroe Islands national team were hard to recognize in the FIFA group F qualifier against Denmark at Tórsvøllur on September 4th, only a couple of days after a humiliating 0-4 loss to Israel.

Håkan Ericson had made three important tactical changes, putting experienced Hallur Hansson and Jóan Símun Edmundsson on the starting eleven alongside keeper Teitur Matras Gestsson who had his best performance on the team so far.

The strong defensive lineup on the Faroese side gave the vastly higher ranked Danes a hard time for the full duration of the match, which turned out a real thriller for the audience. Only five minutes before the 90 minutes had past, Denmark’s Jonas Wind succeeded in scoring to save his team from a stunning embarrassment.

Next up for the Faroese team, on Tuesday night, is Moldova, likewise on Tórsvøllur.