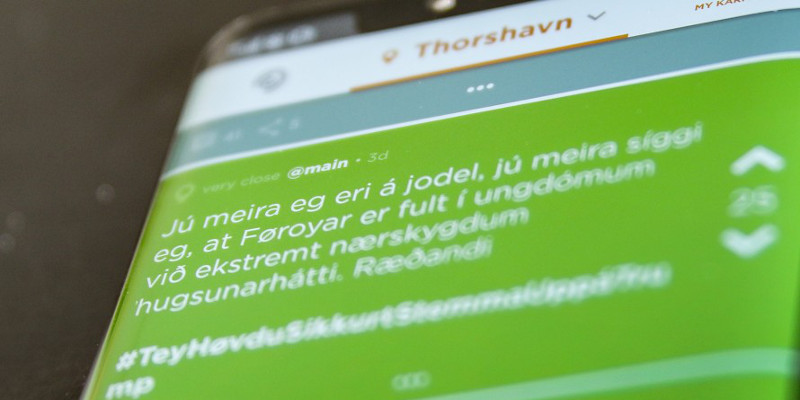 Many may be familiar with “Jodel”, a social media app that allows people to communicate anonymously. The app was first used in Germany in 2014, and it has since made its way to the Faroese youth.

Jákup Justinussen, media expert, explains that Jodel provides a window into the minds of young people in the Faroe Islands. Because all messages are anonymous, people seem more willing to open up, and people can end up getting really personal, he says.

– This is just the price you have to pay, when you believe in a cause like this. I can tell you that this doesn’t affect me at all. People can call me what they want, he told Hvat.fo.

Jodel also got a lot of attention in the Faroe Islands in February 2019 when an anonymous message warned students at the Glasir college in Tórshavn against showing up for school the following day. This prompted one user to ask if they were referring to a school shooting, which in turn made several students afraid to go to school the following day.

The school administration and the police got involved, and the person responsible immediately called the authorities to sort out the matter, explaining that the message had been a joke.

Although Jodel has gotten a lot of negative attention in the Faroe Islands, the content on the app isn’t all negative.

– There’s a little bit of everything, you might say. People talk about sex, parties, and heartache, and as the app allows you to be anonymous you have no filter, which is why some use the app for trolling. When you can be anonymous there will always be some who want to take advantage of that and use it to write something negative, Jákup Justinussen says.

– On the other hand, one good thing about Jodel is that young people are less afraid to ask vulnerable and embarrassing questions, which they wouldn’t otherwise have dared to ask. We also see others answering those questions. You also see people comforting others who feel down. People are also very helpful in providing good advise when someone has a need for it, and you see people defending each other when someone is attacked on the app, he says.

Previous articleDrive-in theatre in Tórshavn was a big success
Next articleCOVID-19: Only three active cases left in the Faroe Islands