Sundays 3-1 defeat to Austria saw the nation’s longest ever unbeaten run ranging back to November 2019, and seven games come to an end; sadly, all good things must end. However, Wednesday’s match away to Scotland is the perfect opportunity to get back to unbeaten ways.

In different circumstances, this fixture would see a considerable array of away fans and a lively atmosphere ascend to either countries stadiums considering the short journey time. But sadly, in these COVID times, no crowds are now the norm. In nine previous encounters, Scotland has won seven, and the other two ended in draws. Including the infamous 2-2 draw in 2002, when the Faroe Islands at one point led 2-0. The Faroese natives are still scratching their heads about how they didn’t win that encounter!

Things are currently joyful for the Scottish National team, as they recently qualified for their first major tournament since 1998. And have arguably their strongest squad in many a year, with Premier League stars such as Scott McTominay, John McGinn, Andrew Robertson, and Kieran Tierney giving the side a strong foundation.

Like the game against Austria, it will not be an easy tie, but in football, anything is possible (which is why we all love it!), and as long as the boys can make us proud (like they did on Sunday), we can’t ask for much more, regardless of the result.

Håkan Ericson’s positive 4-4-2 line-up against Austria was evidence that even against the big teams, he will set up the side to give the game a go, and I don’t see that changing against Scotland. The only question is how he will deal with the third game in just six days, a heavy ask for any squad, let alone one with several part-timers. Here is my starting 11: 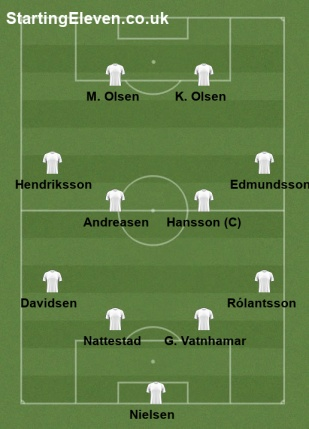 There were just two changes in the starting line-up from Moldova to the Austria game, and I expect Ericson to keep the same core group of players. I would make just two changes again for the Scotland game, with Jákup Andreasen and Klæmint Olsen coming in for Sølvi Vatnhamar and Heini Vatnsdal. I personally would push Gunnar Vatnhamar back to center-back, where he looked so impressive against Austria. Besides, I think Andreasen will add some much-needed fresh energy in the middle of the park, as he did in his cameo on Sunday. I would also be tempted to push Jóan Símun Edmundsson out to his favoured right-wing position to give him some more freedom to dictate player and supply target man Klæmint Olsen, but we will have to wait and see what head coach Ericson has up his sleeve. Let’s hope for a repeat of 2002!

Regarding the game, captain Hallur Hansson said: “All the guys seem excited and fit for the game tomorrow. We played a very good first 30 minutes in the game against Austria and we want to take that with us in tomorrow’s game. Scotland are strong on set pieces where we have let in some goals, so we need to very focused on that tomorrow night as well. But it will without a doubt be a very tough game. But Scotland has only managed to get 2 points out of 6, so I’d say that they are under pressure to win. So, we can use that to our advantage.”