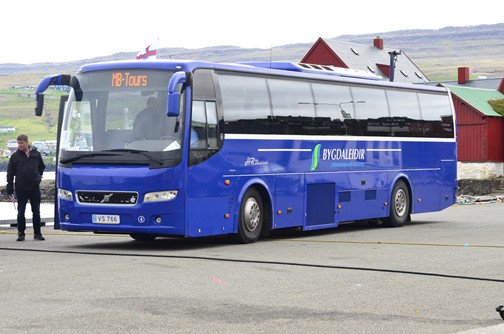 The island of Sandoy will be the first in the country to use eco-friendly buses that run on sustainable green energy, according to Heðin Mortensen, Minister of Transport, Infrastructure and Labour. Distances on the island are short and the terrain is relatively flat, making it well suited for a ‘green’ solution.

The Ministry of Transport, Infrastructure and Labour sees this as the first step in increasing the use of green energy solutions in public transport systems. Should the project on Sandoy prove successful, eco-friendly solutions will be expanded in accordance with the development of green energy.

The interurban bus operation that provides an integrated public transport system between villages across the country is called ‘Bygdaleiðir’. This network of buses and ferries is operated on behalf of the Faroese government by Strandfaraship Landsins. Every few years, companies can bid to win the license to run this network.

The policy of the current government includes the development of green energy. According to the Ministry Transport, Infrastructure and Labour, the project on Sandoy is a supplement to the criteria set in the licensing briefing. It is up to each bidder to decide what type of green energy their buses will use. For example, how much energy is used to drive the buses or where the energy comes from.

Heðin Mortensen says a system will be implemented that incentivises those running the public transport network to use green energy. Strandfaraskip Landsins and the winning company could, for example, make an agreement in which the company gets a larger profit share. This, however, means there must be more work put into increasing the number of passengers that use public transports between villages and towns.

Previous article(Pictures) Dinoland opens – much to the delight of Faroese kids
Next articleCop News: Dog went shopping in Klaksvík (while intoxicated man went fishing on Eysturoy)