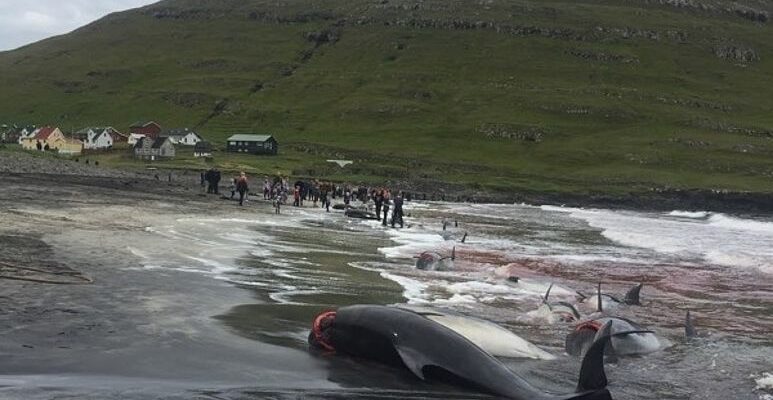 Swiss Facebook user Sea Mammals, who has more than 3.500 followers on Facebook, reacted with fury following the breaking news on Monday that at least 188 pilot whales had been slaughtered in two separate killings in the Faroe Islands.

Sea Mammals condemned the “Gruesome dolphin (Pilot whales) massacre” and urged people to “don’t buy any products from #FaroeIslands” and “be a voice for the voiceless.”

Sea Mammals said on Facebook: “Over 200 dolphins have been killed in danish Faroe Islands just for fun – Bloodlust And these ‘people’ call themselves civilized ?! Today flowed again dolphin blood into the salmon farm !!! Don’t buy any products from #FaroeIslands – Be a voice for the voiceless!”

Some of those commenting on the Sea Mammals‘ Facebook post were not too impressed with the Faroe Islanders either.

One user simply said: “Bastards…Rot in hell you murderers.”

Another user attempted to be a tad more philosophical: “How sick is that, amazing what a group of people can do when acting collectively, surely someone must be saying, this is wrong.”

A third user pointed out that “they (the Faroe Islanders) are not humans, they are barbaric. How can the authorities, the (Danish) Queen let doing that? It’s horrible, and these butchers are learning their kids to kill too. I pray the authorities make an end to this mass killing!!!!”

While a fifth user lamented: “MAY All who participates in these massacres have visions all night long of what they did to these poor souls and never be able to sleep again.”

In other news, Faroese news website VP.fo yesterday brought the news, which is surely bound to delight many people in the Faroe Islands, that around 20 common dolphins had been driven onto the beach of Húsavík on the island of Sandoy. There, they were killed (see picture above).