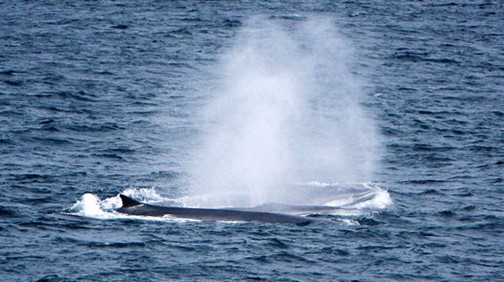 In order to effectively manage human impacts on marine mammals, one must know how many there are in a specific area, and whether population numbers increase or decrease. The Faroe Islands has taken part in the North Atlantic Sightings Survey (NASS) since it started in 1987. Six surveys have been conducted between 1987 and 2015.

The newest results from 2015 show an increase in abundance of some cetaceans in the survey area, which encompasses much of the northern North Atlantic between Norway and North America.

“The surveys show that abundance numbers for whale types that have previously been hunted are on the rise,” says Bjarni Mikkelsen, biologist at Faroese Museum of Natural History and chair of NAMMCO’s Scientific Committee. “These include the fin whale, humpback whale, blue whale and sperm whale. Abundance of other whale populations, such as pilot whales, harbour porpoise, bottlenose whales and minke whales, show neither an increase nor decrease.”

Pilot whales are taken every year in a drive hunt in the Faroe Islands. Therefore, trends in abundance are of great interest, as it is important to know if a population increases or decreases over time.

The latest survey from 2015 suggests a population of well over 500,000 long-finned pilot whales in the North Atlantic. According to NAMMCO, this must be considered a minimum estimate because some areas where long-finned pilot whales are known to occur, such as Davis Strait and the Labrador Sea, and the offshore waters of the North-eastern USA, remain poorly- or un-surveyed. Furthermore, most estimates come from ship surveys that are not corrected for whales that are submerged during the passage of the ship, although this may not be a large bias as long-finned pilot whales rarely dive for more than 18 minutes, and dives are usually much shorter than this. While there appears to have been some decline in abundance estimates of pilot whales over the survey period, the high degree of uncertainty within survey estimates means that this apparent decline is not statistically significant. In contrast, highly significant increase trends have been detected for fin and humpback whales, according to NAMMCO.

Populations of animals my rise or fall in abundance for many reasons. For example, if many animals are taken by hunters, and they are not replaced quickly enough by natural reproduction, a population will fall. A population might rise if it had previously been reduced to a low level, but hunting had since ceased. The detection of trends in abundance is of great importance to management in order to know if the management measures taken are having the desired effect on the population. The six surveys, complete over 28 years (1987-2015), provide a good opportunity for detecting trends in abundance over that period.

According to Bjarni, the NASS are perhaps the largest-scale wildlife surveys ever attempted, covering a maximum area of around 2 million square nautical miles, about the same size as Western Europe, and involving as many as 15 ships, four aircraft and 100 observers in a single survey.

A new survey, the seventh in the series, is planned for 2023. Preparation work will start next year.