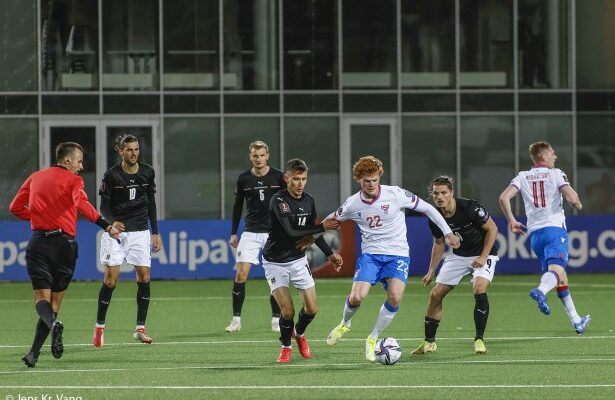 Hannes Agnarsson, jersey no. 22, had a good performance in the match against Austria. Image credits: Jens Kristian Vang.

Sadly the heroics of the team of 1990 could not be evoked, as, on Saturday, the Faroe Islands succumbed to a 2-0 defeat at the hands of Austria.

The Faroe Islands started the game terrifically and forced Austrian goalkeeper Daniel Bachmann into solid saves from Rene Joensen and Edmundsson. The long ball over the top was a constant thorn in the Austrian side, especially from Gestsson’s goal kicks.

However, against the run of play, Austria took the lead on the 26th minute after a break from Ercan Kara from a sloppy interception from Færø, allowed a simple finish from Konrad Laimer. A hammer blow after a positive start, and even more so considering it was also Austria’s first shot on target in the match.

Straight after half-time, the lead was doubled after a fortuitous deflection off Gunnar Vatnhamar from a Marcel Sabitzer shot. The rest of the match was played out as a formality for Austria. Who could have extended their lead if not from some fabulous goalkeeping from Gestsson.

The Faroese performance was full of endeavour and, at times, high-quality interplay. Sadly the most significant difference between the two nations was Austria clinical finishing in front of goal. Whilst the Faroes missed various glaring opportunities when the scores were tied. The nature of the goals conceded will also frustrate coach Håkan Ericson, as giving sloppy chances against top sides like Austria will go punished.

The Faroe Islands will be hoping to bounce back tonight (September 12th) when they face local rivals Scotland at Tórsvøllur. Kick-off is at 19:45 GMT.