HomeWhalingBritish newspaper explains ”how the gruesome slaughter of whales by Faroe Islanders...
Whaling 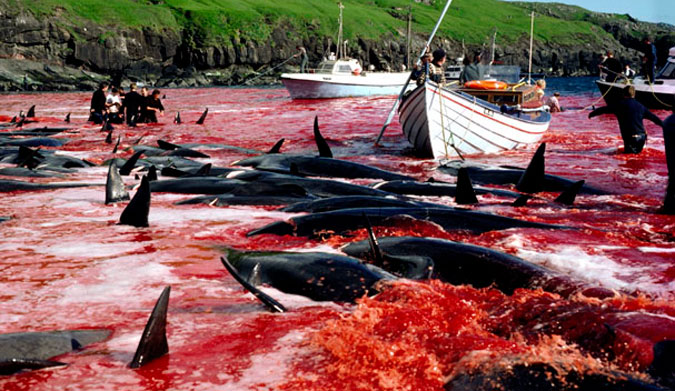 ”An eye-opening new film reveals how the controversial practice of killing whales in the Faroe Islands may come to an end due to dangerous levels of mercury found in the animals’ meat”, writes British newspaper Daily Mail today as Scottish filmmaker Mike Day turns his lens on the Faroe Islands with the new documentary ”The Islands and the Whales”.

The longtime hunting practices of the Faroese are threatened by high mercury levels in whales, decimated seabird populations and anti-whaling activists. Day explores the undeniably timely tensions between the environment, health, tradition and culture, wrote PBS.org before the premiere of the documentary.

Fast forward 10 years and the message seems to be sinking in, writes Daily Mail as the aforementioned documentary points out how eating whale meat can affect peoples’ IQ Levels:

”In the documentary, islanders are shown taking part in a medical study that highlights how eating whale meat contaminated with mercury pushes up levels of the chemical in the body – and what that can do to IQ levels. One father is told that he has a reading of 16.8 ng/mL, while the normal level of mercury in the blood mercury is usually less than 10 ng/mL”, explains Daily Mail, adding that:

”Luckily his daughters have safe levels of mercury in their blood but the doctor warns of the dangers attached to eating whale meat. We see development of the brain slow down. About one IQ point less per doubling of mercury,’ he says. One man in the documentary says he has started eating less whale meat after finding out about the high content of mercury in his body. Others also say they are starting to cut down”, writes Daily Mail.

Daily Mail adds that: ”As the film continues, it becomes clear that the Faroese culture is under threat. Non-profit group Sea Shepherd has long campaigned against whaling on the Faroe Islands and last year it released a series of gruesome photos of a whale hunt in action, with the ocean stained red with blood…The Faroe Islands government stated that whale meat and blubber of pilot whales have long been a valued part of the Faroes’ national diet and is hunting sustainable.”

Mike Day learned about the Faroe Islands while shooting his previous film, The Guga Hunters of Ness (2011), a BBC feature documentary about a Gaelic island community in Scotland embarking on its epic annual seabird hunt in the treacherous North Atlantic. Like the practices of the Faroese, the hunting practices of the Ness community are a deeply rooted part of their society and culture. They are the last men allowed to hunt seabirds in the European Union and the United Kingdom, and for 50 years that ancient tradition remained hidden and little known outside of the community. In 2009, Day sailed with the hunters and filmed their unique voyage.

”The Islands and the Whales shows the unique Faroese community wrangling with the environmental problems we face,” said Day according to PBS.org.

Day continued: “I hope the film gives us a chance to take stock of how we interact with the natural world and encourages us not to ignore the clear signs of the damage we are causing. There is a chance to act now before it’s too late. If we don’t, like the Faroese, we all risk putting contaminated food on the table.”