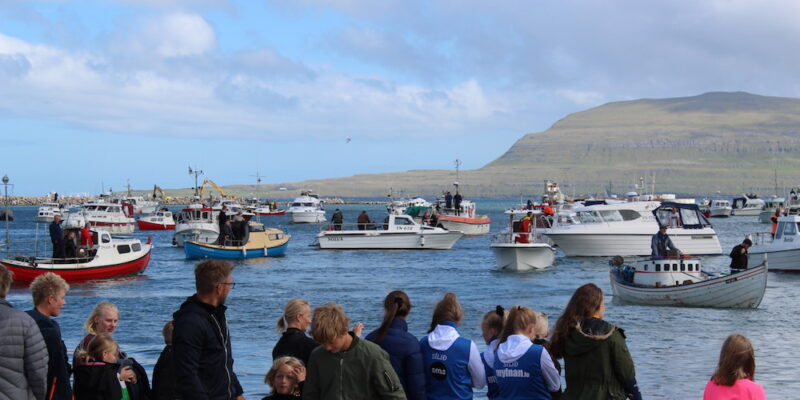 Last week, 6 July, saw the first grindadráp (grind) of the year in the Faroe Islands with 43 pilot whales killed. For those who want to see an end to the practice however, the suggestions of boycotts which are currently circulating again, make no sense at all and only serve to harden the fronts. Angry comments made on social media, or boycotts, don’t effect change, especially on islands and in the Scandinavian countries, where solidarity is written large. In fact, it’s entirely the other way around.

Tourism brings money into a country and this automatically creates change. Local people will adapt to the wishes and needs of the tourists and if every second tourist asked for a fast-food outlet for instance, sooner or later, you’d see fast-food outlets opening. It’s simply about demand and supply.

Tourists have a much bigger influence inside a country than outside. In Iceland for instance, whale watching has become a fast growing business and this has created strong opposition against whaling. Due to the large demand of tourists for whale watching, the locals have realised that whales are worth much more alive than dead. And now imagine for a second what would happen if the whale watch companies had no customers because of a boycott?

Hard To Port recently posted: “The Hard To Port team had a very informative and nice interview with the managing director of North Sailing in Húsavík yesterday. As the latest addition to their fleet, the company currently turns a former whaling boat into a whale watching vessel. North Sailing also worked on a partnership with the supermarket chain Samkaup to stop the sale of whale meat in their grocery stores.”

Visitors to the Faroes will know that this small country is not like Florida or Mallorca. They don’t have, and don’t want, millions of tourists. They don’t have the capacity for “mass tourism”. We are talking about a limited amount of tourists and there will always those who love such places and are unaware of, or ignore, calls for boycotts.

If you want to help end the whaling, put aside the idea of “enemy” and go to these beautiful islands and share your concerns about whaling with the locals. Faroese people are very friendly and open, they don’t hide anything and they’re fine to talk about the topic. The more tourists that share their concerns about the grind, the more Faroese will think about the continuation of it. We have to work with local people, not against them. Some are opposed to the grind anyway, but many more are neutral.

As Jóan Pauli Joensen, author of Pilot whaling in the Faroe Islands said: “On the Faroe Islands people say that ‘the guest’s eye is all-seeing’. The outsider can see what those in the local culture do not due to cultural blindness.”

This article was originally published 11 July 2016 on Cetajournal.net.
Written by: Sasha Abdolmajid