Basil, strawberries and lettuce heads to grow in the Faroe Islands 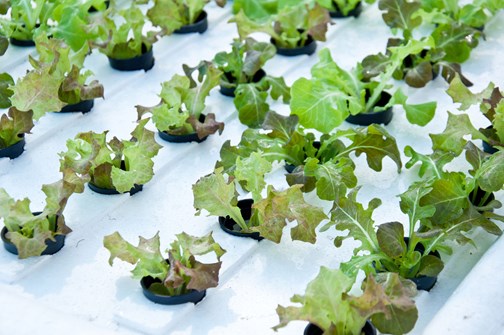 Weather and soil conditions mean vegetables, fruit and herbs have a hard time growing in the Faroe Islands. But soon you will be able to taste locally-produced basil, strawberries and lettuce heads. If everything goes according to plan, that is.

Kenneth Ellefsen and five others have started the company Næla growing vegetables, fruits and herbs using hydroponics, a method of growing plants in a water-based, nutrient-rich solution. No soil is used in the production process.

The idea of growing crops sprung into Kenneth’s head after he had seen a TV show about climate change and greenhouses in 2010.

“The show caught my attention and my curiosity grew once I started discussing the topic with others,” Kenneth recalls. “I started doing tests and getting some results, although I admit I’ve killed many plants along the way!”

Kenneth and his team have started growing crops in an old fish factory in Tórshavn. If everything goes according to plan, they will be able to enjoy their first crops in a few weeks.

Their ambitions are not limited to lettuce heads. They are currently trying to grow three types of lettuce heads, as well as herbs such as basil, oregano, rosemary and dill. They also plan on growing angelica, sorrel, tomatoes, bell peppers, cucumbers and strawberries.

No decision has been taken about how, where and when the first batch of crops will be sold, but the plan is to make these crops available in Faroese grocery shops and restaurants.

“So far, we have focused solely on production, but now we will start looking at sales,” says Kenneth. “Grocery shops have told us that there is no limit to how much we should produce because import of these crops is massive. Growing 400 or 1,000 lettuce heads every week won’t make any real impact in the larger picture of imported lettuce heads.”

Decreasing food waste
Locally produced crops can have a big impact for Faroese shops with regard to food waste.

“We import a great deal from abroad, but a lot also goes to waste because the quality is poor. Vegetables do not stay fresh for very long in Faroese shops because they have already aged quite a lot before they arrive. They travel through Europe to Denmark and then by ferry to the Faroes. En route, they might be damaged by frost or extreme cold. By the time they reach shops, they only last a few days. If shops can get a hold of fruit and vegetables that have been harvested the previous day, these products will last two to three times longer before spoiling. This would decrease waste.”

Self-sufficiency
This summer, media all over the world have told stories about the effects of extreme heat. Wildfires have killed many, droughts have affected crops and farmers have been forced to kill livestock because of a lack of fodder.

Kenneth says: “We have seen that food prices in Europe and elsewhere have been affected by droughts, and according to experts, these weather conditions are the new reality. Vegetation will be affected by water shortages. This will have drastic effects. For example, prices for animal fodder have increased by 80 percent in some countries. The result is that cows and other livestock are being slaughtered earlier because farmers can’t afford fodder.”

Being self-sufficient to some degree will be hugely beneficial to Faroe Islanders, according to Kenneth.

“If we are to believe that these weather conditions are what we should expect from now on, then fruit and vegetables prices will only increase. It would be beneficial for Faroe Islanders to be as self-sufficient as possible, so that we are not at the wrong end and left with leftovers from Europe.”