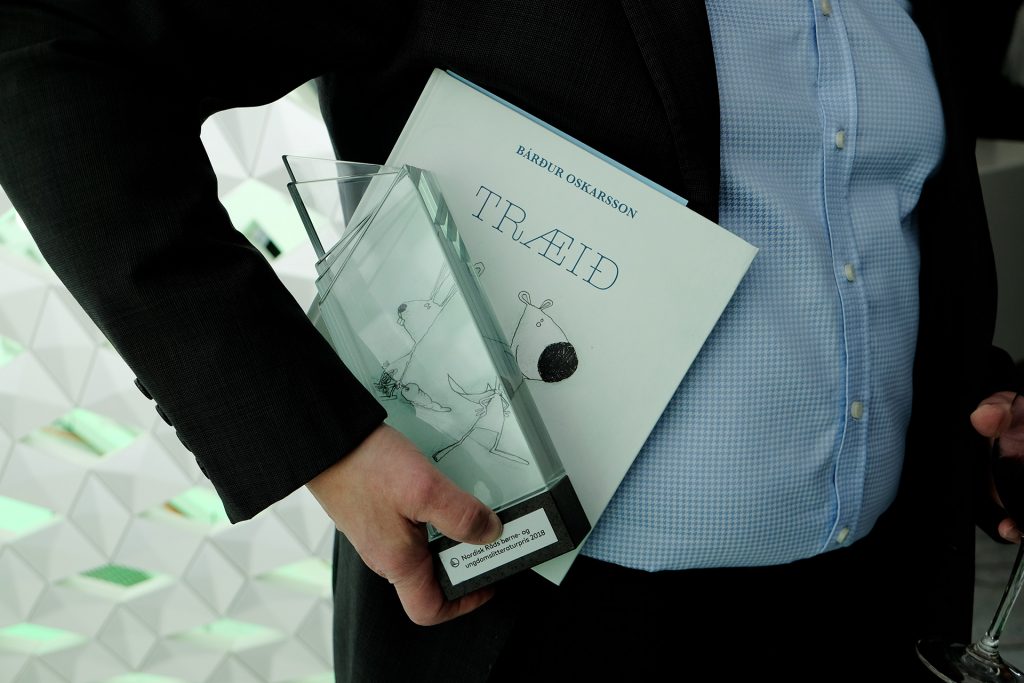 The Nordic Council has awarded Faroese author and illustrator, Bárður Oskarsson, with this year’s Children and Young People’s Literature Prize for his book titled Træið (“The Tree”). This took place at an awards ceremony in Oslo earlier this month.

This is the first time a children and young people’ book written by a Faroese author wins the prestigious Nordic award and only the third time a Faroese work of literature has won a literary award from the Nordic Council. Bárður Oskarsson, who adds this prize to an ever-growing list of literary awards, has consistently proven that his books possess a special quality. He has moved the boundaries for Faroese literature and his books capture the attention of children and adults with their unique amalgamation of depth and simplicity.

Bárður was thrilled to receive the award, which includes a DKK 350,000 check.

He says: “Initially, I was quite surprised and extremely proud. The award probably won’t have much of an effect, other than I might sell a few more copies and the money means I can feel comfortable economically for a few years. I’m already in the process of writing my next book. Træið was fun to work on. My books don’t focus on giving people answers. I would prefer for them to find answers themselves.”

In their statement, the jury said, among other things: “In the face of constant demands to live our lives at an ever faster pace, we have chosen to honour a story that dares to take its time. In a world in which we are constantly bombarded by stimuli, we have selected a book that makes sparse use of words and unpretentious drawings to tell a tale that is both entertaining and profound. The book is notable for its highly accomplished artwork, as well as its great confidence in its readers’ imagination and ability to think for themselves.”

Træið, which was published in 2017, is translated to Danish and Slovenian and there are plans to translate into other languages. It is scheduled for release in the United Kingdom and Italy within the next year. The picture book has also been awarded a White Raven prize from the International Youth Library in Munich, which is the largest library for international children’s and youth literature in the world. Additionally, it won the Children and Young People’s Literature award from the West Nordic Council earlier this year.

Bárður Oskarsson has published seven picture books since 2004, which have been translated into 14 different languages. His books have been published in numerous countries and have received critical acclaim in major publications such as the New York Times.

Previous article
What’s Next for the Faroe Islands?
Next article
“Norwegian salmon is superb food, and safe to eat. But to build a brand, you have to be able to tell a story”