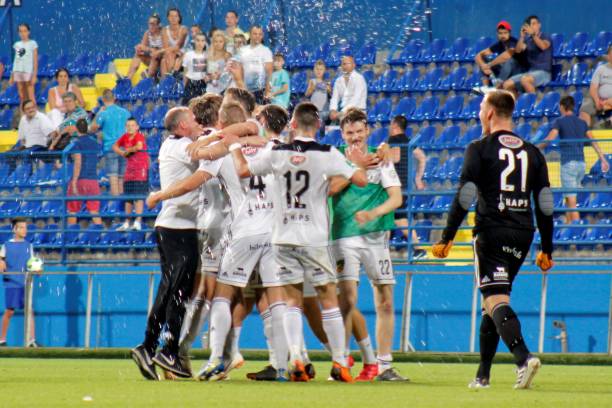 Europa League First qualifying round second leg: Betri Division side B36 Tórshavn defeated Montenegrin outfit OFK Titograd 2-1 away from home to go through on aggregate and set up a spectacular meeting with Turkish Süper Lig club Besiktas in the second qualifying round of UEFA Europa League.

The first leg ended in a 0-0 draw and B36 Tórshavn thus went through to the second round 2-1 on aggregate.

Last night‘s Europa League match got off to an inauspicious start for the Tórshavners as Zoran Petrovic put the Montenegrin side 1-0 up after just 4 minutes, but in the 51st minute Benjamin Heinesen struck to make it 1-1 and advantage B36 Tórshavn, before Kaimar Saag´s 80th minute goal sealed a famous Faroese comeback victory.

Meanwhile, KÍ Klaksvík were knocked out of Europa League after failing to overturn a 2-1 first leg score against Lithuanian outfit Zalgiris, in a 1-1 draw in Vilnius. Liviu Antal put the Lithuanians 1-0 up after 6 minutes, but Ronni Møller-Iversen equalized in the 70th minute.

Elsewhere, NSÍ Runavík were forced to admit a 4-6 home defeat to Scottish Premier League side Hibernian, who were 2-0 down after just five minutes in a nightmare opening – but recovered to make it past the opening round in Europe for the first time in 29 years.