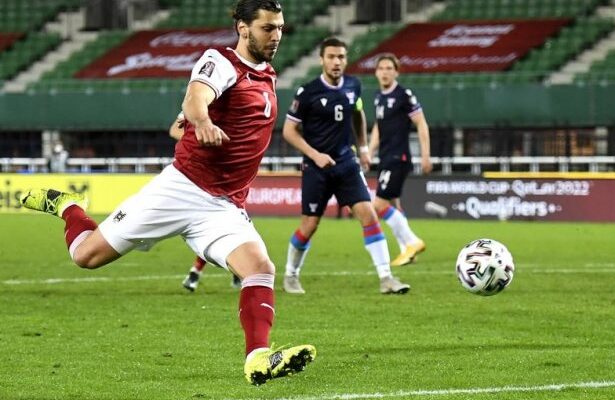 For 11 magnificent minutes, we revived the dream of the 1990s Faroe Islands victory over Austria, when Sonni Nattestad put the Faroe Islands ahead after 18 minutes, with a brave header from Jóan Símun Edmundsson inswinging corner. But the fairy tale was not meant to be, as Austria responded with 3 goals from Dragovic (30 minutes), Baumgartner (37 minutes), Kalajdzic (44 minutes) as they finished 3-1 winners. The second-half was a moral victory as it ended 0-0. But at 1-0, Nattestad had a glorious chance to double the lead but was denied by a fantastic save from Austria keeper Schlager. And we are now left to think about what could have been; here are my player’s ratings:

9) Gilli Rólantsson: 6.5/10 — Had a challenging task down the flank against one of the world best players in David Alaba, but stoically kept going, and his long-throws were a constant threat.

15) Heini Vatnsdal: 5/10 — Didn’t cover himself in glory today, culpable for the second goal, and replaced after 59 minutes.

5) Sonni Nattestad: 7.5/10 — Fantastic header for the goal, and almost scored another one minutes later, a constant threat offensively, slightly more suspect defensively, but a night to remember for the towering centre-back.

3) Viljormur Davidsen: 6.5/10 — Solid down the left side, couple of uncertain moments, but overall steady as ever.

10) Solvi Vatnhamar: 5.5/10 — Found it hard to impose himself into the game, and at times left Rólantsson exposed down the right flank.

6) Hallur Hansson (C): 7/10 — Full of endeavour, energy and a high work rate as per usual. Had a decent chance in the open exchanges, which a player of his quality might have been disappointed not to do better with.

16) Gunnar Vatnhamar: 6/10 — At times overrun in the middle of the park, by Grillitsch, but was impressive aerially, and look far more comfortable when reverting to centre-back in the second half.

8) Brandur Olsen: 8/10 — Another excellent display by the creative midfielder, always calm and positive on the ball. He’s showing he can play against the world’s elite and standout.

14) Jóan Símun Edmundsson: 6/10 — Quite display by the forward, struggled to get involved but got an excellent assist with the deadly corner for Nattestad’s opening goal.

18) Meinhard Olsen: 6/10 — Worked the channels well in the first half, understandably tired as the game wore on.

22) Jákup Andreasen: 6/10 (on 59 min for Vatnsdal) — The KÍ midfielder came on in the second half and looked solid and industrious in the middle.

7) Jóannes Bjartalíð: 5/10 (on 59 min for S. Vatnhamar) — Added some attacking drive but was wasteful on a couple of promising openings.

4) Petur Knudsen: 5.5/10 (on 74 min for Edmundsson) — Night to remember for the debutant, the first cap of many, I am sure. But understandably struggled to force himself onto proceedings when introduced.

Manager Håkan Ericson: 7/10 — A 3-1 defeat against the worlds 23rd ranked team is a respectable result, and it could have been so much better, bar 15 minutes in the first-half the Faroe Islands went toe-to-toe with Austria, but football is a game of fine margins, and mistakes will go punished by elite opponents. Any manager is annoyed when his team concede from set-pieces (like we did for the Austria equaliser), and I imagine Ericson will be as well. The second goal was equally poor, being undone by a simple long ball. And the third just before half-time was a real sucker punch. But Ericson has inserted a real intense character within the squad, and that showed in the second-half when the players refused to let their heads drop and kept going until the final whistle.

Rarely in recent years have a Faroese side gone to high-ranking nations and amassed 9 shots, but tonight we did. The positive tactics Ericson has instilled was evident. And even after the final whistle, the players were visibly dejected with the defeat. This excellent mentality surely bodes well for the national team for years to come!

Next up for the Faroe Islands is a trip to Scotland on Wednesday; the kick-off is at 7.45 pm GMT.