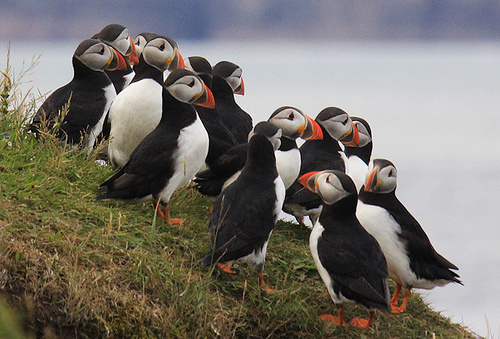 New research led by scientists from Norway, the Faroe Islands and the United Kingdom has found that Atlantic Puffins Fratercula arctica from Scottish and Norwegian populations are significantly heavier in winter than when rearing chicks.

Tycho Anker-Nilssen (Norway), Jens-Kjeld Jensen (the Faroe Islands) and Michael P. Harris (UK) are the researchers behind the article “Fit is fat: winter body mass of Atlantic Puffins Fratercula arctica”, which has been published in Bird Study, a well-known scientific journal.

The researchers explain that the main aim of the study was to compare body masses of Atlantic Puffins on their wintering grounds off the Faroe Islands with those of birds rearing chicks at colonies in Scotland and Norway.

They elaborate: “We took standardized measurements of wing length and body mass of Atlantic Puffins during the summer chick-rearing period and on the wintering grounds near the Faroe Islands. These measurements were used to estimate seasonal changes in body mass for the two breeding populations. In three cases data were available for individuals weighed both at the colony and on the wintering grounds,” the researchers state, according to Tandfonline.com.

The research concludes that, on the average, Atlantic Puffins breeding in Scotland and Norway increased their body mass by 20–30% between the chick-rearing period and winter.

Nilssen, Jensen and Harris state that these results provide the first estimates of the order of magnitude in mass change between two key life history stages in this species.

“They indicate that gains in body mass between chick-rearing and winter are at least double the decline in mass previously recorded between incubation and chick-rearing. Given the Atlantic Puffin’s deteriorating conservation status, improved information on seasonal changes in body condition should help determine the underlying causes of die-offs in major wreck incidents such as those reported in recent years,” the researchers point out.