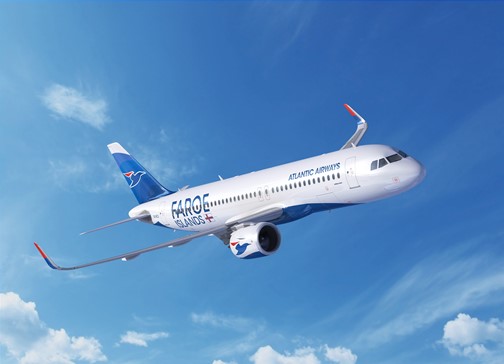 Atlantic Airways, the national airline of the Faroe Islands, has ordered a new Airbus 320neo aircraft. The newest purchase is the airline’s fourth 320neo aircraft from Airbus, bringing the total fleet to six aircraft.

“Our aim is to have the newest airplanes with the newest technology available,” says Jóhanna á Bergi, CEO at Atlantic Airways.

The airline’s current fleet includes two A319ceo and one A320eno aircraft, with the other three A320neo to arrive in 2020, 2023 and 2024, respectively. The all-economy layout of the A320neo aircraft will offer 174 seats. The better fuel efficiency will enable Atlantic Airways to expand and develop its current route offerings.

Featuring the widest single-aisle cabin in the sky, the efficient A320neo Family incorporates the very latest technologies including new generation engines and Sharklets, which together deliver more than 20 percent fuel and CO2 savings as well as a 50 percent noise reduction. With more than 6,500 orders received from over 100 customers, the A320neo Family has captured some 60 percent of the market.

Atlantic Airways, an Airbus customer since 2008, has also signed a deal with Danish travel agency Primo Tours which will enable the airline to make profitable use of the new aircraft during the off-season. The newest aircraft will be used on routes from Denmark to various southern destinations during low season.

Atlantic Airways operates direct flights all year round from the Faroe Islands to Paris, Copenhagen, Billund, Edinburgh, Reykjavik and Bergen, and seasonal flights to Barcelona, Mallorca, Canary Islands and Aalborg.

Interested in seeing how the 320neo aircraft is built? Check out this video.

Previous articleHB are Faroese Cup winners after infamous fog-fueled win over Víkingur
Next articleThe Faroese Minister of Health: The stigmatization must stop