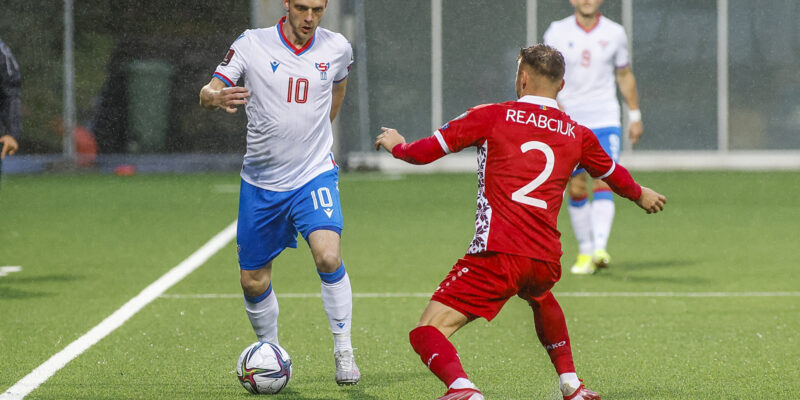 It’s been quite the week in football for the Faroes; first, the Under-21s get a massive draw against France, and now the Men’s senior team have their first win of the European qualifying campaign, beating Moldova 2-1 at Tórsvøllur. In a tight first half, chances were at a premium, with Meinhard Olsen’s narrowly offside goal the most significant opportunity of any note.

The second half was a more open affair, especially after Håkan Ericson’s tactical masterstroke in the 65th to change to a 4-4-2 formation and to bring on Jákup Andreasen and Jóan Símun Edmundsson, which altered the whole complexion of the match. Just three minutes later, it allowed Klæmint Olsen to powerfully head in Hallur Hansson’s inviting cross. Then on minute 71, Heini Vatnsdal scrambled in a rebound after Andreasen hit the bar from a dangerous Hendriksson corner. Minutes later, Olsen nearly got his second after he fired just wide from a smart Edmundsson chest down.

However, out of nowhere, Moldova found a route back into the match, after a horrific slice from Gunnar Vatnhamar, coupled with miscommunication with Teitur Gestsson, allowed Nicolae Milinceanu to pass into an empty net.

The last five minutes were a pretty straightforward albeit nervy affair, which the Faroese player saw out with considerable ease and could have even got a third if not for Moldovan keeper Cristian Avram impressive save from Hansson’s piledriver.

The Faroe Islands were deserved victors, and under coach Håkan Ericson, you can really feel an increased sense of confidence, tactical nouse, and overall fitness level. With the last effort by Hallur Hansson being a prime example of that, as despite being in the 4th minute of additional time, five players sprinted the length of the pitch to support the attack.

Here are my player ratings.

13) Teitur Gestsson: 8/10 — Little to do all evening, bar a good long-distance save, very good with the ball at feet, maybe partially to blame for the mix up for Moldova’s goal.

9) Gilli Rólantsson: 8.5/10 — Worked tirelessly up and down the right-hand side all evening, fantastic defensively and offensively.

4) Heini Vatnsdal: 8.5/10 — He started off shaky but grew into the game and was commanding and alert to all dangers; he also did excellently to turn in the vital second goal. MOTM.

3) Daniel Johansen: 8.5/10 — An assured performance for a man making his first start for the national side; no Moldovan player got the better of him and has a really dangerous cross on him.

6) Hallur Hansson (C): 8.5/10 — The influential captain covered every blade of grass, put in a superb cross for the opening goal, and almost got one for himself if not for a wonder save.

16) Gunnar Vatnhamar: 7.5/10 — Was having a fantastic game up until the horror miskick for the Moldova goal, which marked him down somewhat.

10) Brandur Hendriksson: 8/10 — Carrying an injury but was still the Faroes most creative player, amazing vision and work-rate.

19) Meinhard Olsen: 7/10 — Worked hard as usual, but little came off for the Bryne man tonight.

11) Klæmint A. Olsen: 7.5/10 — Was anonymous all evening, but like all good strikers popped up with that all-important goal, with a gorgeous header into the ground, then nearly grabbed his second.

10) Sølvi Vatnhamar:  8.5/10 — Tireless game from the veteran, never stopped running, kept the ball well, and put in some dangerous crosses.

Jóan Símun Edmundsson (65 minute for M. Olsen): 8/10 — Added some quality up front, and his introduction changed the game.

Jákup Andreasen (65 minute for O. Færø): 8/10 — Like Edmundsson, his introduction changed the game, some great passes, and nearly got the goal before Vatnsdal scrambled it in.

Håkan Ericson: 8.5/10 — Produced a tactical masterclass when he changed the formation from 4-5-1 to 4-4-2, along with the introduction of Edmundsson and Andreasen, which led to the two goals, can be pleased with his work tonight.

The victory was met with jubilant celebrations by the Faroese faithful, in the knowledge that they had won the most winnable game of the group. It shows how far the archipelago group have come to play a nation 50x their population (2.6 million against 52,000) and expect a victory.

After the game, I spoke to indispensable right back Gilli Rólantsson, who said, “First of all, we were happy to get the three points. To play at home in front of our fans, there is just nothing better than that, it was an unbelievable atmosphere. We knew it would be a 50/50 game. But after 90 minutes, I think we deserved the victory. Not the best game to watch, but we take three points with us and look forward to playing at home in three-four weeks.”

When reflecting on the week’s round of matches, Gilli stated, “When we look back at these games, we are very disappointed with the first one (against Israel). The first goal was too easy, and the second one was my mistake. We started very well, but when we give away such an easy goal, it’s hard to come back into the match, because you know they are a good football team. We came back and worked very well as a team in the Denmark game; we were so close to taking one point against them. But the boys should be proud even if we lost that game at the last minute.”

For winger Meinhard Olsen, the game held an even more profound significance, as he remarked, “It was a special game for me personally, big three points and I became a father the night before and played the game the same evening, was gassed after 60 minutes, but delighted to see the boys pull it home. It was the biggest day of my life!”

We send a special congratulations to Meinhard Olsen and his family!

Next up for the Faroe Islands is Austria at home on the 9th of October.