Video: Artist turns his home into public gallery for 3-day exhibition and concert 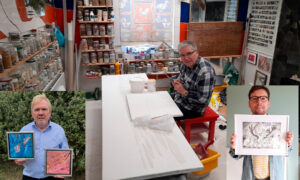 Last weekend, Tórshavn artist Eli Smith, who is well known for his stone paintings and mosaics, turned his home at Børkugøta into a public gallery and invited everyone to an art exhibition there. On display were, alongside his own works, watercolored drawings from a children’s book by his son artist Napoleon Smith as well as acrylic paintings by next-door neighbor, architect and artist Magni Dalsgaard. Live performances by singers and musicians were held on all three days, headlined by the dozen-strong local boys’ choir Dreingjakórið undir Brúnni — the Faroe Islands’ only boys’ choir, originally formed by Smith back in 1999, at which point the then 20 choir members were all living in the same neighborhood.

“The turnout was excellent and things worked out great,” Smith junior reported. “People were thrilled and the concerts were really the icing on the cake. This was the first time ever we did this, and we’re most definitely likely to do it again. The atmosphere was a bit like that of some of the ‘Hoyma’ home concerts however, obviously, more focused on visual arts.”

Smith’s home remains open to visits in person, we’re told — as well as virtually through this video.