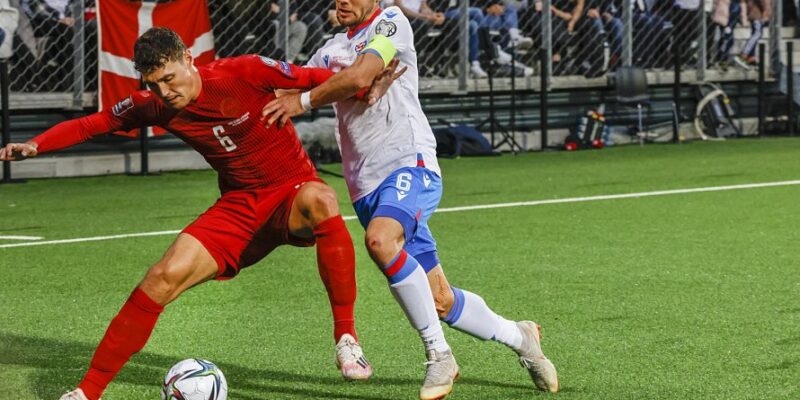 From the match between Faroes and Denmark in Tórshavn on September 4th. Image credits: Jens Kristian Vang.

On Friday evening, the Faroe Islands take on Kingdom comrades Denmark in the penultimate match of the 2022 FIFA World Cup qualification campaign. With Denmark already qualified and the Faroe Islands already eliminated, not much competitive significance is on the line (the Faroe Islands are battling with Moldova to avoid the bottom place in the group).

The opportunity to get one over their realm foes would go down in Faroese folklore. And after the narrow 1-0 defeat in the reserve fixture in Tórshavn, confidence is relativity high in the Faroese camp. This optimism, however, has been somewhat blighted by injuries (Gilli Rólantsson, Meinhard Olsen, Heini Vatnsdal and Ári Mohr Jónsson), Covid cases (Daniel Johansen, Jóannes Danielsen), and suspension (Brandur Hendriksson) to seven first-team players.

The absence of Hendriksson will especially be felt, as he is Faroes’ main creative outlet. In addition, Gilli Rólantsson, Meinhard Olsen and Ári Mohr Jónsson have been regular starters in recent matches and will also be sorely missed.

As seen on numerous occasions in the past, when the nation loses key players, the gulf in the class of replacements is highly noticeable, as the squad lacks strength in depth to competitively rotate, which is, of course, understandable for a nation of just 52,000 people.

Denmark themselves are missing several key players such as Christian Eriksen, Martin Braithwaite, Mikkel Damsgaard and Pierre-Emile Højbjerg. But with such strength in their squad, they will fancy their chances of victory — as the Danes are in the form of their lives, having garnered the maximum points from eight matches and, rather staggeringly, scoring 27 goals in the process without conceding (yes, Faroese fans, you can wince now!).

Some 1,800 Faroese supporters will be inside the Parken Stadium in Copenhagen, and I’m sure they will make themselves be heard in an electrifying atmosphere. Can the boys bring home an unlucky positive result? Kick-off is 20.45 CET.