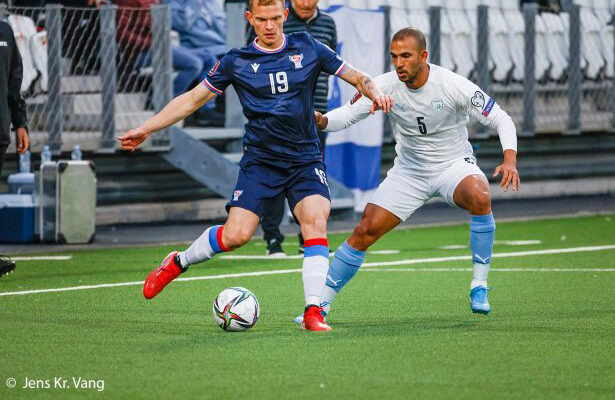 Meinhard Olsen (19) worked hard for the Faroese side as usual, this time to no avail though. Image credits: Jens Kristian Vang.

Israel marched to a comprehensive 4-0 victory in Tórshavn against a labored Faroese side.

The line-up was an unfamiliar one, with talismanic captain Hallur Hansson only fit for the bench. In his place, goalkeeper Gunnar Nielsen captained the nation. Makeshift left-back René Joensen started his first international game in over two years after Viljormur Davidsen was ruled out due to Covid protocols.

The match affirmed that the Faroes understandably lack strength-in-depth, and if they lose a couple of keymen from the starting line-up, they are a severely weakened side.

The Faroes Islands were naively caught on the break for Israel’s opener from Eran Zahavi, who was also the man who doubled the lead just before half-time with a powerful long-distance shot past Nielsen. Mu’nas Dabbur added another just after half-time, tapping in a smart cross from Manor Solomon.

The Faroes’ last 25 minutes were a much-improved display, largely down to the game already being won by Israel and the substitutes adding some needed energy. But Zahavi did manage to get his hattrick and his country’s fourth just before the full-time whistle. It rounded off a generally miserable evening for the Faroe Islands, who were easily beaten without a notable effort at the Israeli goal.

9) Gilli Rólantsson: 4.5/10 — Ever running as always, with little end product tonight, was at fault for the second goal with a poor pass back.

15) Odmar Færø: 6/10 — Made some impressive last-ditch tackles at the back, can be happy with his contribution.

5) Sonni Nattestad: 5.5/10 — Won a lot of duels in the air; however, run ragged by the impressive Israeli frontline.

20) René S. Joensen: 4/10 — Hard night for a player who has rarely played at left-back in international football, understandably struggled.

Hallur Hansson (63 minute for J. Andreasen): 6/10 — Could clearly see the energy and presence the captain brought to the pitch when he entered, irreplaceable part of the side

Håkan Ericson: 4/10 — Worst display for the Swedish coach in his entire tenure, set up negatively with the defensive G. Vatnhamar and Andreasen midfield partnership, which lacked technical ability. Playing the right-footed Joensen at left-back made for a disjointed set-up, and K. Olsen was isolated all game. He got it wrong tonight; plenty of food for thought for the coach.