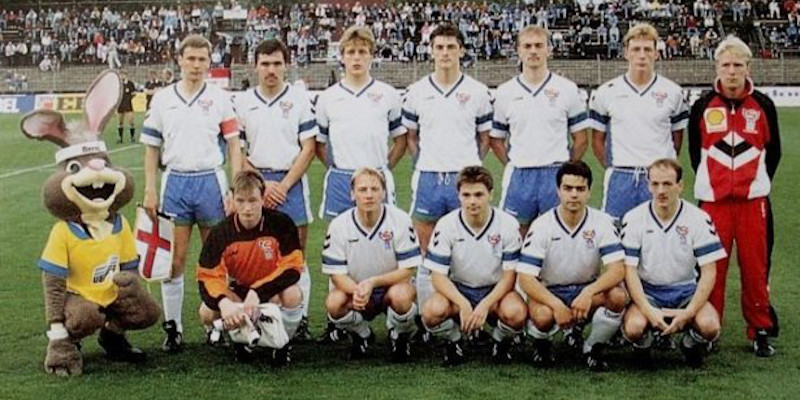 The Faroe Islands were pretty new in international football, the Faroese Football Association having only become a member of FIFA two years prior, and of UEFA in April of that same year.

The Austrian team, however, had played at the 1990 FIFA World Cup in Italy a few months earlier.

At the time, the Faroe Islands didn’t even have a suitable stadium to play their home matches on, which is why the match was played in Landskrona, Sweden.

The Faroese 1-0 victory was unexpected, to put it mildly, and an embarrassing loss for the Austrian national team. Josef Hickersberger, the coach of Austria’s team, quit after the match.

About 3-400 Faroese spectators were present for the match in Landskrona, most of them were students studying in Copenhagen, but those watching the match at home in the Faroe Islands missed the first 15 minutes or so of the match due to a blackout.

But the goal, which Torkil Nielsen scored 61 minutes into the match, was visible for everyone to see.

After the end of the match, people gathered in the streets, and several schools cancelled all lessons the next day. A reception was held in Tórshavn, when the team returned from Sweden, and  the players were also celebrated in their individual home towns.

In the Faroe Islands, the match is celebrated as one of the proudest moments in Faroese football history. When the word “Landskrona” is mentioned, Faroese natives immediately know which event a person is referring to.

The new sports bar in Tórshavn, Landskrona, is named in honour of the Faroese victory 30 years ago, and to celebrate the anniversary of the victory, the bar showed the match on Saturday night, and the team who won the match in 1990 had a reunion to celebrate. The anniversary was also marked in both TV and radio.

Previous articleFive new COVID-19 cases: All contracted in the virus in the Faroe Islands
Next articleMinister of Health: The number of travellers who have chosen to get a second test is unclear