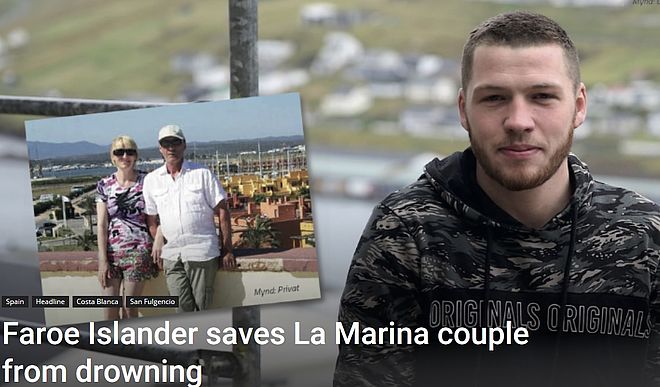 22-year-old Hans Berg Hansen from Klaksvík became the hero of the day when he saved a German couple from drowning while on holiday in Spanish coastal village La Marina.

The incident, which took place in late August this year, has made a lot of headlines, first and foremost in the Faroe Islands, but also abroad. This week Mr. Hansen shared his version of the story with local Spanish news outlet Theleader.info.

“While swimming I passed a man who looked to be in difficulty. He was lying on his back splashing with his hands and trying to keep his head above water, while the waves washed over him. I decided to swim over to him to try to find out what could be wrong,” Mr. Hansen explained.

“Then I heard him yelling the name Eleana three times, she was also swimming. Then he yelled a word that I didn‘t understand, so I swam over to him and asked him in English, if he needed help. But he obviously didn‘t understand what I said. But I stretched out my hand and he took it immediately. It was then that I realised the man was in a really bad physical situation.

I put my arms around him and tried to swim towards the beach. But it was not easy. Now I was also in a mess with the man that I was trying to save pulling me down because of panic.

By nature, I am a little impatient, so I chose not to be over-hasty, but consider for a moment what to do. I was sure if I dropped him, and saved myself, he would never reappear and drown. In this situation it was of help that I had attended a safety course in Klaksvík navigational college. I never panicked,” stated Mr. Hansen, who then let the waves take the man to the beach.

“When we could touch the bottom with our feet I gave him my arm and supported him. He was so powerless and weak that he hung on my body. He couldn‘t even stand. At last (he) managed to walk alone the last few steps to the beach,” said Mr. Hansen.

Thereafter, he turned his attention to Eleana.

“…She was also in physical bad situation, basically powerless, so I left the man as I understood, he could manage himself,” Mr. Hansen pointed out, adding:

“I swam up to her, took around her and started swimming towards the beach. This was an easier job, she was not as heavy as her husband. She did not swim herself, so I had to swim all the way in. Later she told me, she could not swim, but she had gone into the see to try to help her husband when she saw him in difficulty. She knew, he had problems with his heart, but she didn‘t know anything about the strong underwater currents.”

Ever since the incident, Hans Berg Hansen, his girlfriend Sólrún and the German couple have stayed in touch via internet. Apparently, they have all become good friends.

“In the beginning she (Eleana) said that she had not told her mother and family about the event, she was afraid it would be too emotional, but she had told her son the whole story. She said next time she was going to Spain, she would leave the key for their house with a neighbor, so that Sólrun and I, and my parents, could always stay there,” concluded Hans Berg Hansen.

Previous articleAnnual autumn celebration turns into spending spree, robust ram is sold for a staggering 16.500 at auction
Next articleFaroe Islanders given another opportunity to fly straight to The Holy Land from Iceland