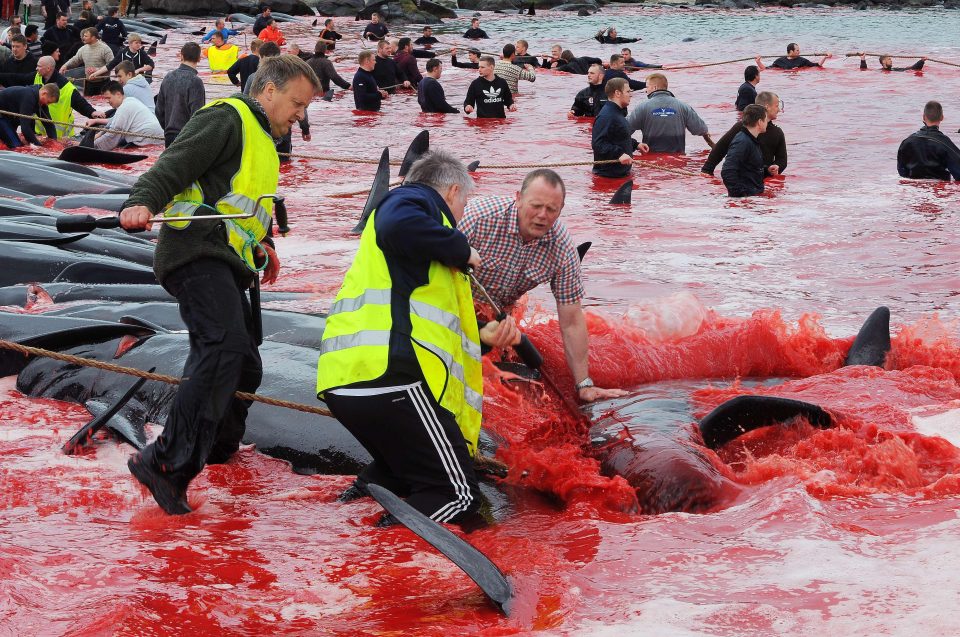 Sea Shepherd volunteers, posing as tourists, watched nine whale hunts in the Faroe Islands from July to September last year that they claim wiped out 198 dolphins and 436 whales, writes The Sun.

One Sea Shepherd volunteer told Fox News: ”Witnessing a grind first hand was truly an eye-opening experience. As the pilot whales were driven to the shoreline by the small boats the intensity of the thrashing bodies grew. Hooks were sunk into the blowholes and the whales were dragged onto the shore in a sadistic game of ‘Tug of War.’ We witnessed whales seemingly bashing their heads against the stones in a frenzy.”

Around 1.700 pilot whales and white-sided dolphins were caught in the Faroe Islands in 2017, according to the Faroese government.

However, the Faroese government defends the practice: ”Sea Shepherd representatives will go to any lengths to paint a negative picture of the Faroese whale hunt as barbaric and evil with the aim of inciting anger and outrage against the people of the Faroe Islands. Catches are shared largely without the exchange of money among the participants in a whale drive and residents of the local district where they are landed”, said the Faroese Government according to Fox News.

The Faroese government added: ”Each whale provides the communities with several hundred kilos of meat and blubber – meat that otherwise had to be imported from abroad”.

Faroese authorities point out that: “Whaling on the islands is sustainable. The long-term annual average catch of pilot whales – i.e. around 800 whales, with large fluctuations in total catches and the number of individual whale drives from year to year – in the Faroe Islands represents less than 1% of the total estimated stock”.

The islands’ government adds that the pilot whale population in the eastern North Atlantic is approximately 778,000, of which around 100,000 are around the Faroes.