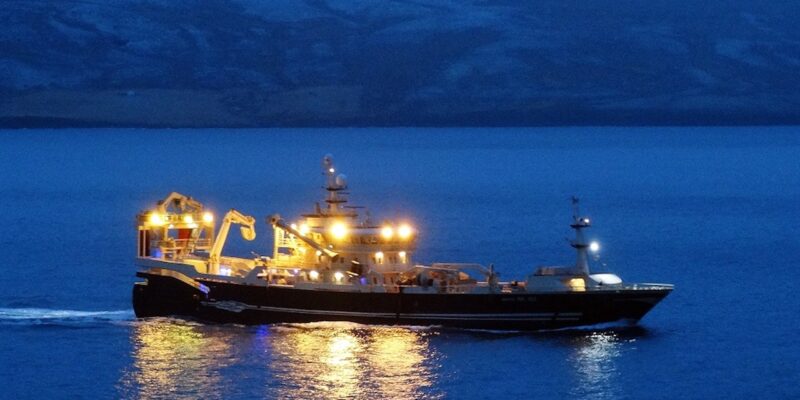 Fishing for blue whiting in Faroese waters hasn’t been big hauls and short trips for the Icelandic pelagic fleet in recent weeks.

In the last few days Síldarvinnslan’s plant at Vestmannaeyjar has taken delivery of landings from Bjarni Ólafsson, Beitir and Börkur, while both of Brim’s pelagic vessels, Venus and Víkingur have been landing to that company’s fishmeal factory in Vopnafjörður.

This week the Bjarni Ólafsson landed 1100 tonnes of blue whiting, followed by the Börkur with 1900 tonnes and Beitir with 1700 tonnes, all caught in Faroese waters.

“We landed 1160 tonnes, caught in seven tows,” he said. “There’s only one haul a day and the best was 300 tonnes, and all the way down to 20 tonnes. The problem is that the fish are too small, which came as a surprise. We searched for larger fish over a wide area. We went east of the Faroes, to the north-east and the south-east, but it’s the same story everywhere.”

At this time of year there are usually large blue whiting to be found in Faroese waters — but not this time, the skipper noted.

“I think the larger fish are migrating that far to the east that they don’t come inside the EEZ, at least not during this trip. Now large areas have been closed due to catches of small fish, which is normal.”

According to Albert Sveinsson, who skippers Brim’s pelagic vessel Víkingur, the standard 20-hour tows during their last trip also dropped as low as 20 tonnes, while their best haul yielded 350 tonnes. He agreed that larger fish have been scarce.

“The blue whiting are heading southwards, but the fish we were catching were medium-sized and seem to be more static than the larger migratory fish,” he said “There are measures in place to protect the smallest fish and during the trip there were four or five area closures due to catches of small fish.”

“This was a pretty long trip for us, close to two weeks,” Sveinsson added. “I reckon we lost around four days to bad weather. There had been fishing there before we arrived on the fishing grounds, but after that it was very patchy.”

“Let’s hope it improves,” Runólfsson added. “There are boats at work there and we’re waiting for news — but now the forecast is for heavy weather on those grounds for the rest of the week.”